A Note On Charity Through Marginal Price Discrimination


 A Note On Charity Through Marginal Price Discrimination

The following is an interesting idea that I had two years ago that I personally believe has promise and could be easily implemented in the context of a blockchain ecosystem, though if desired it could certainly also be implemented with more traditional technologies (blockchains would help get the scheme network effects by putting the core logic on a more neutral platform).

Suppose that you are a restaurant selling sandwiches, and you ordinarily sell sandwiches for $7.50. Why did you choose to sell them for $7.50, and not $7.75 or $7.25? It clearly can't be the case that the cost of production is exactly $7.49999, as in that case you would be making no profit, and would not be able to cover fixed costs; hence, in most normal situations you would still be able to make some profit if you sold at $7.25 or $7.75, though less. Why less at $7.25? Because the price is lower. Why less at $7.75? Because you get fewer customers. It just so happens that $7.50 is the point at which the balance between those two factors is optimal for you. 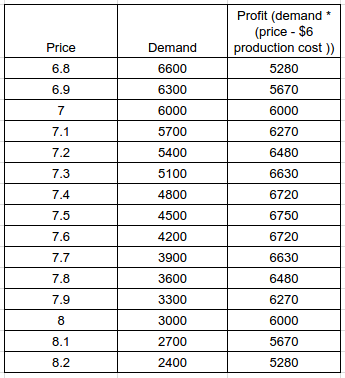 Notice one consequence of this: if you make a slight distortion to the optimal price, then even compared to the magnitude of the distortion the losses that you face are minimal. If you raise prices by 1%, from $7.50 to $7.575, then your profit declines from $6750 to $6733.12 - a tiny 0.25% reduction. And that's profit - if you had instead donated 1% of the price of each sandwich, it would have reduced your profit by 5%. The smaller the distortion the more favorable the ratio: raising prices by 0.2% only cuts your profits down by 0.01%.

Now, you could argue that stores are not perfectly rational, and not perfectly informed, and so they may not actually be charging at optimal prices, all factors considered. However, if you don't know what direction the deviation is in for any given store, then even still, in expectation, the scheme works the same way - except instead of losing $17 it's more like flipping a coin where half the time you gain $50 and half the time you lose $84. Furthermore, in the more complex scheme that we will describe later, we'll be adjusting prices in both directions simultaneously, and so there will not even be any extra risk - no matter how correct or incorrect the original price was, the scheme will give you a predictable small net loss. 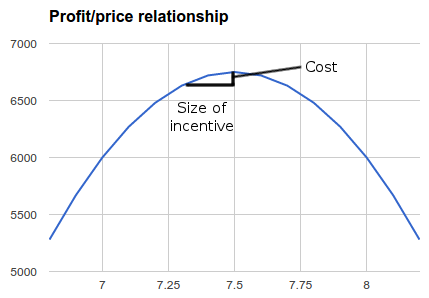 Now, what we can start to do is build up an ecosystem of "stickers", which are non-transferable digital "tokens" that organizations hand out to people who they think are contributing to worthy causes. Tokens could be organized by category (eg. poverty relief, science research, environmental, local community projects, open source software development, writing good blogs), and merchants would be free to charge marginally lower prices to holders of the tokens that represent whatever causes they personally approve of.

The next stage is to make the scheme recursive - being or working for a merchant that offers lower prices to holders of green stickers is itself enough to merit you a green sticker, albeit one that is of lower potency and gives you a lower discount. This way, if an entire community approves of a particular cause, it may actually be profit-maximizing to start offering discounts for the associated sticker, and so economic and social pressure will maintain a certain level of spending and participation toward the cause in a stable equilibrium.

As far as implementation goes, this requires:

So this is something that can certainly be bootstrapped within a small community and user base and then let to grow over time.

Update 2017.03.14: here is an economic model/simulation showing the above implemented as a Python script.

Update 2018.07.28: after discussions with others (Glen Weyl and several Reddit commenters), I realized a few extra things about this mechanism, some encouraging and some worrying: