STARKs, Part I: Proofs with Polynomials


 STARKs, Part I: Proofs with Polynomials

Special thanks to Eli Ben-Sasson for ongoing help, explanations and review, coming up with some of the examples used in this post, and most crucially of all inventing a lot of this stuff; thanks to Hsiao-wei Wang for reviewing

Hopefully many people by now have heard of ZK-SNARKs, the general-purpose succinct zero knowledge proof technology that can be used for all sorts of usecases ranging from verifiable computation to privacy-preserving cryptocurrency. What you might not know is that ZK-SNARKs have a newer, shinier cousin: ZK-STARKs. With the T standing for "transparent", ZK-STARKs resolve one of the primary weaknesses of ZK-SNARKs, its reliance on a "trusted setup". They also come with much simpler cryptographic assumptions, avoiding the need for elliptic curves, pairings and the knowledge-of-exponent assumption and instead relying purely on hashes and information theory; this also means that they are secure even against attackers with quantum computers.

However, this comes at a cost: the size of a proof goes up from 288 bytes to a few hundred kilobytes. Sometimes the cost will not be worth it, but at other times, particularly in the context of public blockchain applications where the need for trust minimization is high, it may well be. And if elliptic curves break or quantum computers do come around, it definitely will be.

So how does this other kind of zero knowledge proof work? First of all, let us review what a general-purpose succinct ZKP does. Suppose that you have a (public) function \(f\), a (private) input \(x\) and a (public) output \(y\). You want to prove that you know an \(x\) such that \(f(x) = y\), without revealing what \(x\) is. Furthermore, for the proof to be succinct, you want it to be verifiable much more quickly than computing \(f\) itself.

Let's go through a few examples: 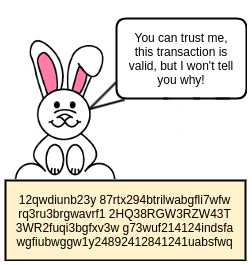 So what's so hard about all this? As it turns out, the zero knowledge (ie. privacy) guarantee is (relatively!) easy to provide; there are a bunch of ways to convert any computation into an instance of something like the three color graph problem, where a three-coloring of the graph corresponds to a solution of the original problem, and then use a traditional zero knowledge proof protocol to prove that you have a valid graph coloring without revealing what it is. This excellent post by Matthew Green from 2014 describes this in some detail.

The much harder thing to provide is succinctness. Intuitively speaking, proving things about computation succinctly is hard because computation is incredibly fragile. If you have a long and complex computation, and you as an evil genie have the ability to flip a 0 to a 1 anywhere in the middle of the computation, then in many cases even one flipped bit will be enough to make the computation give a completely different result. Hence, it's hard to see how you can do something like randomly sampling a computation trace in order to gauge its correctness, as it's just to easy to miss that "one evil bit". However, with some fancy math, it turns out that you can.

The general very high level intuition is that the protocols that accomplish this use similar math to what is used in erasure coding, which is frequently used to make data fault-tolerant. If you have a piece of data, and you encode the data as a line, then you can pick out four points on the line. Any two of those four points are enough to reconstruct the original line, and therefore also give you the other two points. Furthermore, if you make even the slightest change to the data, then it is guaranteed at least three of those four points. You can also encode the data as a degree-1,000,000 polynomial, and pick out 2,000,000 points on the polynomial; any 1,000,001 of those points will recover the original data and therefore the other points, and any deviation in the original data will change at least 1,000,000 points. The algorithms shown here will make heavy use of polynomials in this way for error amplification. 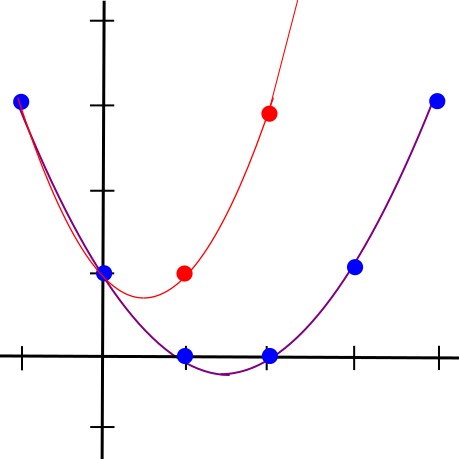 Suppose that you want to prove that you have a polynomial \(P\) such that \(P(x)\) is an integer with \(0 \leq P(x) \leq 9\) for all \(x\) from 1 to 1 million. This is a simple instance of the fairly common task of "range checking"; you might imagine this kind of check being used to verify, for example, that a set of account balances is still positive after applying some set of transactions. If it were \(1 \leq P(x) \leq 9\), this could be part of checking that the values form a correct Sudoku solution.

The "traditional" way to prove this would be to just show all 1,000,000 points, and verify it by checking the values. However, we want to see if we can make a proof that can be verified in less than 1,000,000 steps. Simply randomly checking evaluations of \(P\) won't do; there's always the possibility that a malicious prover came up with a \(P\) which satisfies the constraint in 999,999 places but does not satisfy it in the last one, and random sampling only a few values will almost always miss that value. So what can we do? 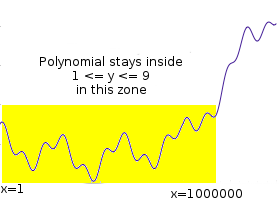 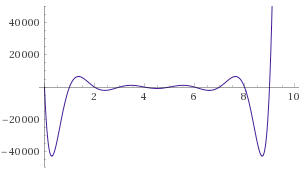 So how does one prove this claim? We can imagine the proof process as a three-step communication between a prover and a verifier: the prover sends some information, then the verifier sends some requests, then the prover sends some more information. First, the prover commits to (ie. makes a Merkle tree and sends the verifier the root hash of) the evaluations of \(P(x)\) and \(D(x)\) for all \(x\) from 1 to 1 billion (yes, billion). This includes the 1 million points where \(0 \leq P(x) \leq 9\) as well as the 999 million points where that (probably) is not the case. 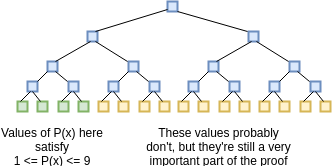 We assume the verifier already knows the evaluation of \(Z(x)\) at all of these points; the \(Z(x)\) is like a "public verification key" for this scheme that everyone must know ahead of time (clients that do not have the space to store \(Z(x)\) in its entirety can simply store the Merkle root of \(Z(x)\) and require the prover to also provide branches for every \(Z(x)\) value that the verifier needs to query; alternatively, there are some number fields over which \(Z(x)\) for certain \(x\) is very easy to calculate). After receiving the commitment (ie. Merkle root) the verifier then selects a random 16 \(x\) values between 1 and 1 billion, and asks the prover to provide the Merkle branches for \(P(x)\) and \(D(x)\) there. The prover provides these values, and the verifier checks that (i) the branches match the Merkle root that was provided earlier, and (ii) \(C(P(x))\) actually equals \(Z(x) \cdot D(x)\) in all 16 cases.

So... what did we just do? We used polynomials to "boost" the error in any bad solution, so that any incorrect solution to the original problem, which would have required a million checks to find directly, turns into a solution to the verification protocol that can get flagged as erroneous at 99% of the time with even a single check.

We can convert this three-step mechanism into a non-interactive proof, which can be broadcasted by a single prover once and then verified by anyone, using the Fiat-Shamir heuristic. The prover first builds up a Merkle tree of the \(P(x)\) and \(D(x)\) values, and computes the root hash of the tree. The root itself is then used as the source of entropy that determines what branches of the tree the prover needs to provide. The prover then broadcasts the Merkle root and the branches together as the proof. The computation is all done on the prover side; the process of computing the Merkle root from the data, and then using that to select the branches that get audited, effectively substitutes the need for an interactive verifier.

The only thing a malicious prover without a valid \(P(x)\) can do is try to make a valid proof over and over again until eventually they get extremely lucky with the branches that a Merkle root that they compute selects, but with a soundness of \(1 - 10^{-32}\) (ie. probability of at least \(1 - 10^{-32}\) that a given attempted fake proof will fail the check) it would take a malicious prover billions of years to make a passable proof.

To illustrate the power of this technique, let's use it to do something a little less trivial: prove that you know the millionth Fibonacci number. To accomplish this, we'll prove that you have knowledge of a polynomial which represents a computation tape, with \(P(x)\) representing the \(x\)th Fibonacci number. The constraint checking polynomial will now hop across three x-coordinates: \(C(x_1, x_2, x_3) = x_3-x_2-x_1\) (notice how if \(C(P(x), P(x+1), P(x+2)) = 0\) for all \(x\) then \(P(x)\) represents a Fibonacci sequence). 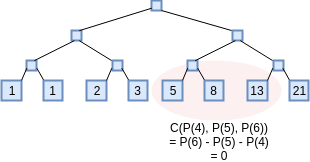 Now, to accomplish this in reality there are two problems that need to be resolved. The first problem is that if we actually try to work with regular numbers the solution would not be efficient in practice, because the numbers themselves very easily get extremely large. The millionth Fibonacci number, for example, has 208988 digits. If we actually want to achieve succinctness in practice, instead of doing these polynomials with regular numbers, we need to use finite fields - number systems that still follow the same arithmetic laws we know and love, like \(a \cdot (b+c) = (a\cdot b) + (a\cdot c)\) and \((a^2 - b^2) = (a-b) \cdot (a+b)\), but where each number is guaranteed to take up a constant amount of space. Proving claims about the millionth Fibonacci number would then require a more complicated design that implements big-number arithmetic on top of this finite field math.

Second, you might have noticed that in my above proof sketch for soundness I neglected to cover one kind of attack: what if, instead of a plausible degree-1,000,000 \(P(x)\) and degree-9,000,000 \(D(x)\), the attacker commits to some values that are not on any such relatively-low-degree polynomial? Then, the argument that an invalid \(C(P(x))\) must differ from any valid \(C(P(x))\) on at least 990 million points does not apply, and so different and much more effective kinds of attacks are possible. For example, an attacker could generate a random value \(p\) for every \(x\), then compute \(d = C(p) / Z(x)\) and commit to these values in place of \(P(x)\) and \(D(x)\). These values would not be on any kind of low-degree polynomial, but they would pass the test.

It turns out that this possibility can be effectively defended against, though the tools for doing so are fairly complex, and so you can quite legitimately say that they make up the bulk of the mathematical innovation in STARKs. Also, the solution has a limitation: you can weed out commitments to data that are very far from any degree-1,000,000 polynomial (eg. you would need to change 20% of all the values to make it a degree-1,000,000 polynomial), but you cannot weed out commitments to data that only differ from a polynomial in only one or two coordinates. Hence, what these tools will provide is proof of proximity - proof that most of the points on \(P\) and \(D\) correspond to the right kind of polynomial.

As it turns out, this is sufficient to make a proof, though there are two "catches". First, the verifier needs to check a few more indices to make up for the additional room for error that this limitation introduces. Second, if we are doing "boundary constraint checking" (eg. verifying \(P(0) = P(1) = 1\) in the Fibonacci example above), then we need to extend the proof of proximity to not only prove that most points are on the same polynomial, but also prove that those two specific points (or whatever other number of specific points you want to check) are on that polynomial.

In the next part of this series, I will describe the solution to proximity checking in much more detail, and in the third part I will describe how more complex constraint functions can be constructed to check not just Fibonacci numbers and ranges, but also arbitrary computation.