Special thanks to Dankrad Feist for review

Garbled circuits are a quite old, and surprisingly simple, cryptographic primitive; they are quite possibly the simplest form of general-purpose "multi-party computation" (MPC) to wrap your head around.

Here is the usual setup for the scheme:

Extra cryptographic wrappings can be used to protect the scheme against Alice and Bob sending wrong info and giving each other an incorrect answer; we won't go into those here for simplicity, though it suffices to say "wrap a ZK-SNARK around everything" is one (quite heavy duty and suboptimal!) solution that works fine.

So how does the basic scheme work? Let's start with a circuit: 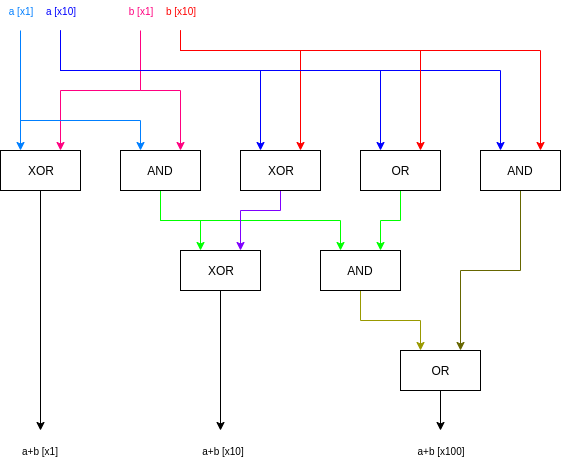 This is one of the simplest examples of a not-completely-trivial circuit that actually does something: it's a two-bit adder. It takes as input two numbers in binary, each with two bits, and outputs the three-bit binary number that is the sum.

Now, let's encrypt the circuit. First, for every input, we randomly generate two "labels" (think: 256-bit numbers): one to represent that input being 0 and the other to represent that input being 1. Then we also do the same for every intermediate wire, not including the output wires. Note that this data is not part of the "garbling" that Alice sends to Bob; so far this is just setup. 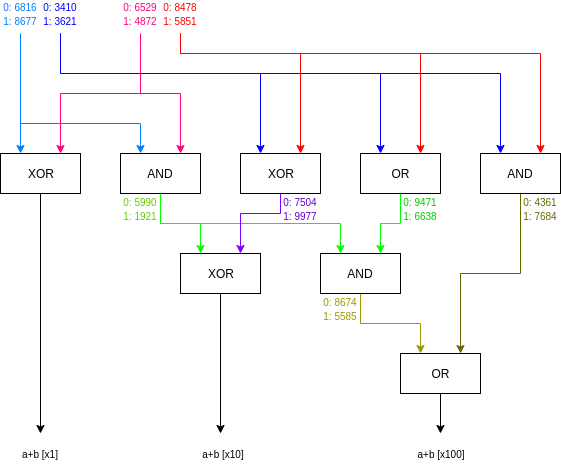 Now, for every gate in the circuit, we do the following. For every combination of inputs, we include in the "garbling" that Alice provides to Bob the label of the output (or if the label of the output is a "final" output, the output directly) encrypted with a key generated by hashing the input labels that lead to that output together. For simplicity, our encryption algorithm can just be enc(out, in1, in2) = out + hash(k, in1, in2) where k is the index of the gate (is it the first gate in the circuit, the second, the third?). If you know the labels of both inputs, and you have the garbling, then you can learn the label of the corresponding output, because you can just compute the corresponding hash and subtract it out.

Here's the garbling of the first XOR gate:

Notice that we are including the (encrypted forms of) 0 and 1 directly, because this XOR gate's outputs are directly final outputs of the program. Now, let's look at the leftmost AND gate:

Here, the gate's outputs are just used as inputs to other gates, so we use labels instead of bits to hide these intermediate bits from the evaluator.

The "garbling" that Alice would provide to Bob is just everything in the third column for each gate, with the rows of each gate re-ordered (to avoid revealing whether a given row corresponds to a 0 or a 1 in any wire). To help Bob learn which value to decrypt for each gate, we'll use a particular order: for each gate, the first row becomes the row where both input labels are even, in the second row the second label is odd, in the third row the first label is odd, and in the fourth row both labels are odd (we deliberately chose labels earlier so that each gate would have an even label for one output and an odd label for the other). We garble every other gate in the circuit in the same way.

All in all, Alice sends to Bob four ~256 bit numbers for each gate in the circuit. It turns out that four is far from optimal; see here for some optimizations on how to reduce this to three or even two numbers for an AND gate and zero (!!) for an XOR gate. Note that these optimizations do rely on some changes, eg. using XOR instead of addition and subtraction, though this should be done anyway for security.

When Bob receives the circuit, he asks Alice for the labels corresponding to her input, and he uses a protocol called "1-of-2 oblivious transfer" to ask Alice for the labels corresponding to his own input without revealing to Alice what his input is. He then goes through the gates in the circuit one by one, uncovering the output wires of each intermediate gate.

And so Bob learns the output: 101. And in binary 10 + 11 actually equals 101 (the input and output bits are both given in smallest-to-greatest order in the circuit, which is why Alice's input 10 is represented as (0, 1) in the circuit), so it worked!

Note that addition is a fairly pointless use of garbled circuits, because Bob knowing 101 can just subtract out his own input and get 101 - 11 = 10 (Alice's input), breaking privacy. However, in general garbled circuits can be used for computations that are not reversible, and so don't break privacy in this way (eg. one might imagine a computation where Alice's input and Bob's input are their answers to a personality quiz, and the output is a single bit that determines whether or not the algorithm thinks they are compatible; that one bit of information won't let Alice or Bob know anything about each other's individual quiz answers).

Now let us talk more about 1-of-2 oblivious transfer, this technique that Bob used to obtain the labels from Alice corresponding to his own input. The problem is this. Focusing on Bob's first input bit (the algorithm for the second input bit is the same), Alice has a label corresponding to 0 (6529), and a label corresponding to 1 (4872). Bob has his desired input bit: 1. Bob wants to learn the correct label (4872) without letting Alice know that his input bit is 1. The trivial solution (Alice just sends Bob both 6529 and 4872) doesn't work because Alice only wants to give up one of the two input labels; if Bob receives both input labels this could leak data that Alice doesn't want to give up.

This solves the problem; Bob learns one of the two wire labels (either 6529 or 4872), depending on what his input bit is, and Alice does not know which label Bob learned.

Garbled circuits are potentially useful for many more things than just 2-of-2 computation. For example, you can use them to make multi-party computations of arbitrary complexity with an arbitrary number of participants providing inputs, that can run in a constant number of rounds of interaction. Generating a garbled circuit is completely parallelizable; you don't need to finish garbling one gate before you can start garbling gates that depend on it. Hence, you can simply have a large multi-party computation with many participants compute a garbling of all gates of a circuit and publish the labels corresponding to their inputs. The labels themselves are random and so reveal nothing about the inputs, but anyone can then execute the published garbled circuit and learn the output "in the clear". See here for a recent example of an MPC protocol that uses garbling as an ingredient.

Multi-party computation is not the only context where this technique of splitting up a computation into a parallelizable part that operates on secret data followed by a sequential part that can be run in the clear is useful, and garbled circuits are not the only technique for accomplishing this. In general, the literature on randomized encodings includes many more sophisticated techniques. This branch of math is also useful in technologies such as functional encryption and obfuscation.