Halo and more: exploring incremental verification and SNARKs without pairings


 Halo and more: exploring incremental verification and SNARKs without pairings

Special thanks to Justin Drake and Sean Bowe for wonderfully pedantic and thoughtful feedback and review, and to Pratyush Mishra for discussion that contributed to the original IPA exposition.

Readers who have been following the ZK-SNARK space closely should by now be familiar with the high level of how ZK-SNARKs work. ZK-SNARKs are based on checking equations where the elements going into the equations are mathematical abstractions like polynomials (or in rank-1 constraint systems matrices and vectors) that can hold a lot of data. There are three major families of cryptographic technologies that allow us to represent these abstractions succinctly: Merkle trees (for FRI), regular elliptic curves (for inner product arguments (IPAs)), and elliptic curves with pairings and trusted setups (for KZG commitments). These three technologies lead to the three types of proofs: FRI leads to STARKs, KZG commitments lead to "regular" SNARKs, and IPA-based schemes lead to bulletproofs. These three technologies have very distinct tradeoffs:

So far, the first and the third have seen the most attention. The reason for this has to do with that pesky right column in the second row of the table: elliptic curve-based inner product arguments have linear verification time. What this means that even though the size of a proof is small, the amount of time needed to verify the proof always takes longer than just running the computation yourself. This makes IPAs non-viable for scalability-related ZK-SNARK use cases: there's no point in using an IPA-based argument to prove the validity of an Ethereum block, because verifying the proof will take longer than just checking the block yourself. KZG and FRI-based proofs, on the other hand, really are much faster to verify than doing the computation yourself, so one of those two seems like the obvious choice.

More recently, however, there has been a slew of research into techniques for merging multiple IPA proofs into one. Much of the initial work on this was done as part of designing the Halo protocol which is going into Zcash. These merging techniques are cheap, and a merged proof takes no longer to verify than a single one of the proofs that it's merging. This opens a way forward for IPAs to be useful: instead of verifying a size-\(n\) computation with a proof that takes still takes \(O(n)\) time to verify, break that computation up into smaller size-\(k\) steps, make \(\frac{n}{k}\) proofs for each step, and merge them together so the verifier's work goes down to a little more than \(O(k)\). These techniques also allow us to do incremental verification: if new things keep being introduced that need to be proven, you can just keep taking the existing proof, mixing it in with a proof of the new statement, and getting a proof of the new combined statement out. This is really useful for verifying the integrity of, say, an entire blockchain.

So how do these techniques work, and what can they do? That's exactly what this post is about.

Inner product arguments are a proof scheme that can work over many mathematical structures, but usually we focus on IPAs over elliptic curve points. IPAs can be made over simple elliptic curves, theoretically even Bitcoin and Ethereum's secp256k1 (though some special properties are preferred to make FFTs more efficient); no need for insanely complicated pairing schemes that despite having written an explainer article and an implementation I can still barely understand myself.

We'll start off with the commitment scheme, typically called Pedersen vector commitments. To be able to commit to degree \(< n\) polynomials, we first publicly choose a set of base points, \(G_0 ... G_{n-1}\). These points can be generated through a pseudo-random procedure that can be re-executed by anyone (eg. the x coordinate of \(G_i\) can be \(hash(i, j)\) for the lowest integer \(j \ge 0\) that produces a valid point); this is not a trusted setup as it does not rely on any specific party to introduce secret information. 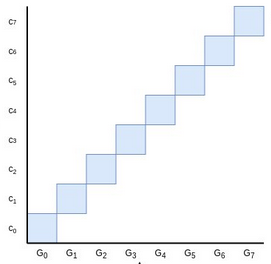 Though it's not really mathematically accurate to think of elliptic curve points as being like real numbers that have sizes, area is nevertheless a good intuition for thinking about linear combinations of elliptic curve points like we use in these commitments. The blue area here is the value of the Pedersen commitment \(C = \sum_i c_i G_i\) to the polynomial \(P = \sum_i c_i x^i\).

Of course, technically any point is some multiple of \(G_0\) and so it's theoretically a valid commitment of something, but what we care about is proving that the prover knows some \(\{c_0 ... c_{n-1}\}\) such that \(\sum_i c_i G_i = C\). A commitment \(C\) cannot commit to multiple distinct polynomials that the prover knows about, because if it could, that would imply that elliptic curves are broken.

The prover could, of course, just provide \(\{c_0 ... c_{n-1}\}\) directly and let the verifier check the commitment. But this takes too much space. So instead, we try to reduce the problem to a smaller problem of half the size. The prover provides two points, \(L\) and \(R\), representing the yellow and green areas in this diagram: 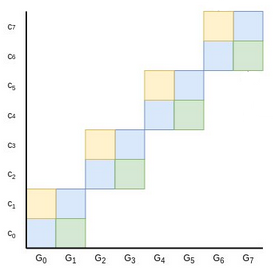 You may be able to see where this is going: if you add \(C + L + R\) together (remember: \(C\) was the original commitment, so the blue area), the new combined point can be expressed as a sum of four squares instead of eight. And so now, the prover could finish by providing only four sums, the widths of each of the new squares. Repeat this protocol two more times, and we're down to a single full square, which the prover can prove by sending a single value representing its width. 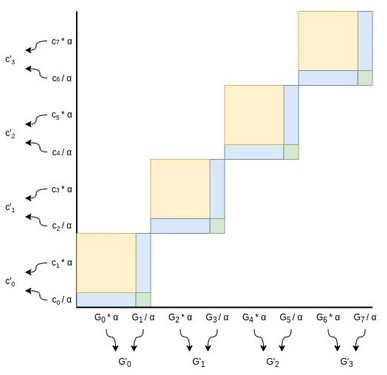 Hence, we can generate our new half-size instance of the problem with some simple transformations:

And then we repeat the process until we get down to one point: 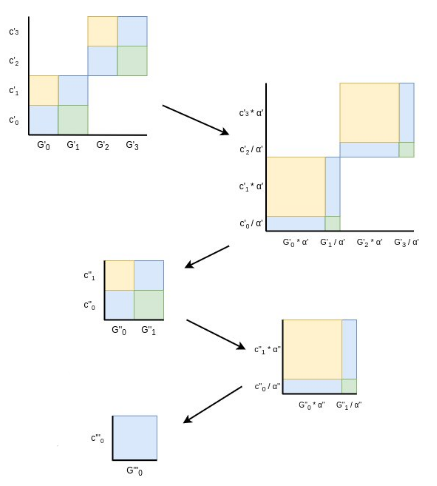 On the whole, the proof contains \(2 * log(n)\) elliptic curve points and one number (for pedants: one field element). Verifying the proof takes logarithmic time in every step except one: computing the new \(G'_i\) values. This step is, unfortunately, linear.

We can make a Pedersen commitment using this extended base! 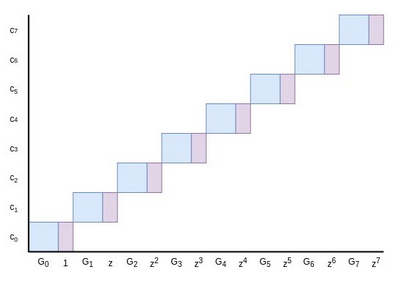 Note that in practice, this is usually done slightly differently as an optimization: instead of attaching the numbers to the points and explicitly dealing with structures of the form \((G_i, z^i)\), we add another randomly chosen base point \(H\) and express it as \(G_i + z^i H\). This saves space.

See here for an example implementation of this whole protocol.

So, how do we combine these proofs?

Suppose that you are given two polynomial evaluation proofs, with different polynomials and different evaluation points, and want to make a proof that they are both correct. You have:

Verifying each proof takes linear time. We want to make a proof that proves that both proofs are correct. This will still take linear time, but the verifier will only have to make one round of linear time verification instead of two.

The above polynomial has degree \(n - 1\), with \(n\) nonzero coefficients. But its un-expanded form has size \(log(n)\), and so you can evaluate the polynomial at any point in \(O(log(n))\) time. Additionally, you might notice that \(G^*_0\) is a commitment to this polynomial, so we can directly prove evaluations! So here is what we do: 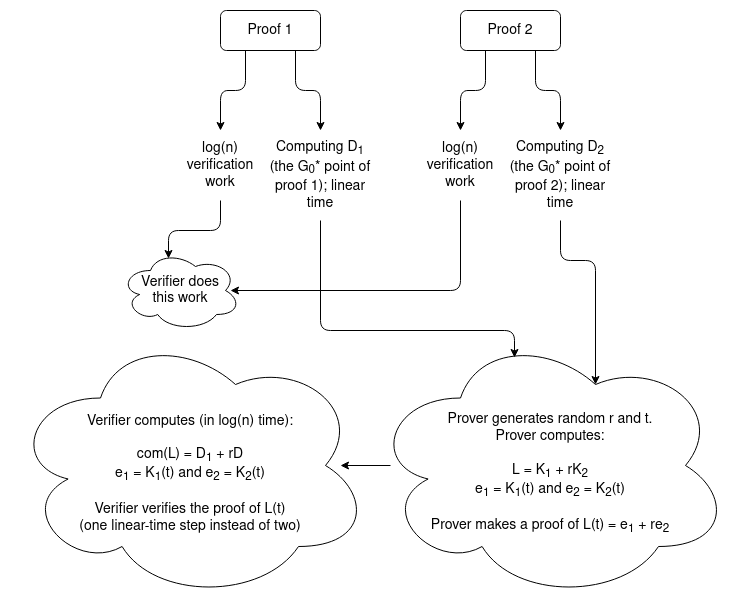 This technique can easily be generalized to merge \(m > 2\) signatures.

Essentially, we use the usual "recursive SNARK" technique to verify the proofs, except the "proof of a proof" part is only proving the logarithmic part of the work. We add an extra chain of aggregate proofs, using a trick similar to the proof merging scheme above, to handle the linear part of the work. To verify the whole chain, the verifier need only verify one linear-time proof at the very tip of the chain.

The precise details are somewhat different from the exact proof-combining trick in the previous section for efficiency reasons. Instead of using the proof-combining trick to combine multiple proofs, we use it on a single proof, just to re-randomize the point that the polynomial committed to by \(G^*_0\) needs to be evaluated at. We then use the same newly chosen evaluation point to evaluate the polynomials in the proof of the block's correctness, which allows us to prove the polynomial evaluations together in a single IPA.

The size of each "step" does not need to be a full block verification; it could be something as small as a single step of a virtual machine. The smaller the steps the better: it ensures that the linear work that the verifier ultimately has to do at the end is less. The only lower bound is that each step has to be big enough to contain a SNARK verifying the \(log(n)\) portion of the work of a step.

But regardless of the fine details, this mechanism allows us to make succinct and easy-to-verify SNARKs, including easy support for recursive proofs that allow you to extend proofs in real time as the computation extends and even have different provers to do different parts of the proving work, all without pairings or a trusted setup! The main downside is some extra technical complexity, compared with a "simple" polynomial-based proof using eg. KZG-based commitments.

A common alternative to building SNARKs out of polynomial games is building SNARKs out of matrix-vector multiplication games. Polynomials and vectors+matrices are both natural bases for SNARK protocols because they are mathematical abstractions that can store and compute over large amounts of data at the same time, and that admit commitment schemes that allow verifiers to check equations quickly. 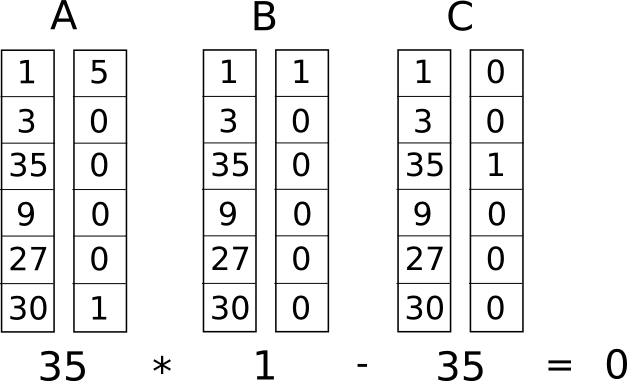 Just like with polynomial-based SNARKs, this R1CS game can be turned into a proof scheme by creating commitments to \(A\), \(B\) and \(C\), requiring the prover to provide a commitment to (the private portion of) \(Z\), and using fancy proving tricks to prove the equation \((A \cdot Z) \circ (B \cdot Z) = C \cdot Z\), where \(\circ\) is item-by-item multiplication, without fully revealing any of these objects. And just like with IPAs, this R1CS game has a proof merging scheme!

Ioanna Tzialla et al describe such a scheme in a recent paper (see page 8-9 for their description). They first modify the game by introducing an expanded equation:

For a "base" instance, \(u = 1\) and \(E = 0\), so we get back the original R1CS equation. The extra slack variables are added to make aggregation possible; aggregated instances will have other values of \(u\) and \(E\). Now, suppose that you have two solutions to the same instance, though with different \(u\) and \(E\) variables:

The first term is just \(E_1\); the third term is \(r^2 * E_2\). The middle term is very similar to the cross-term (the yellow + green areas) near the very start of this post. The prover simply provides the middle term (without the \(r\) factor), and just like in the IPA proof, the randomization forces the prover to be honest.

Hence, it's possible to make merging schemes for R1CS-based protocols too. Interestingly enough, we don't even technically need to have a "succinct" protocol for proving the \[ (A \cdot Z) \circ (B \cdot Z) = u * (C \cdot Z) + E\] relation at the end; instead, the prover could just prove by opening all the commitments directly! This would still be "succinct" because the verifier would only need to verify one proof that actually represents an arbitrarily large number of statements. However, in practice having a succinct protocol for this last step is better because it keeps the proofs smaller, and Tzialla et al's paper provides such a protocol too (see page 10).

The march toward faster and more efficient and safer ZK-SNARKs just keeps going...